O. K., so I did tell myself that I had to get this nostalgia thing under control, and I admit that beginning my first post of the new year in french does not bode well for the instinctual change that I was aiming for.  But like with all  my addictions, my intentions are so much stronger than the moment in which I am faced with the choice…

The year is two-thousand and ten.  It is a Friday morning and it is the 1st day of January.  How many wishes have I made on December 31st simply to not even notice them vanish by the morning of the 1st.  Writing out the date this morning, I could not help but be reminded of the beginning of some binomial code– One’s & Zero’s stringing themselves ad infinitum to mean some new 11th dimension of space and time.

Last night, while quietly staying at home and waiting for the grossly expensive , eleven hundred pound, Waterford crystal ball to fall, the announcer gave a brief nod to the ec0-friendly manner in which the numbers “2 0 1 0” would be illuminated this year.  It was a scene right out of the Matrix.  Humans had been recruited to pedal stationary bikes in order to generate the power necessary to light the numbers in Time Square…I got to thinking, that with all the recent people that we now have permanently unemployed, why not simply harness them to electrical generators and let them pedal their way to the next meal.  After all we do have a new condition in which the economy will recover, i.e., the very wealthy will have back all the monies they lost gambling on Wall street, and we will sustain a new 20% unemployment rate, complete with foreclosures, homelessness, & bankruptcies.

The middle class will be shrunk by a good chunk of multi-millions of  people; the elite aristocracy will continue to build new Asters and Duponts and the abject poor will once again be blamed for their own circumstances.  But instead of simply blaming them, perhaps we could also punish them while making them useful–sort of, in the way that old ore-locked battle ships chained men and boys to the ores and whipped them to power the ship across the sea.

But now, we can have camps, maybe even under bridges with thousand’s of stationary bikes lined up and strung together as energy generating machines.  It would help to provide several answers to this coming decades problems.  First and foremost we would not have to build ugly-not-in-my-back-yard windmills.   And each township across the country would be responsible for collecting enough unemployed peddlers to illuminate their own towns and industries.

Without knowing it Carson Daly in his once a year moment of fame, pointed to the answer to our energy crisis.  We only need to peddle or paddle our way back to days of gilded  glory.

I know that i am suppose to be nice today, and wink and nod and tell everyone that hope and abundance  & prosperity are waiting in the wings of 2010 and that everything will be all right because we are starting fresh and the universe will supply everyone with all that they need, and if the universe does not do it maybe the Salvation Army or the Johnnycake center will.

I am mad, mad at a world that lets the fat cats be named such, then congress goes home without as much as indicating that financial regulations and the banking industry will even be considered as needing reform.  But, I suppose we can not blame the poor congress, they had a rough time all ready this year, pretending to help the American Health Industry while supplying the Insurance and Pharmaceuticals everything that their lobbies wanted.  Why else would stock prices rise some 20% after the announcement of the law was passed.

We do not have health reform as a christmas present, we have a chunk of coal in the form or a bill that will make the health insurance giants also too big to fail.  By the way, too big to fail means that the corporation is bigger and more powerful than the government so it can not be stopped from it cancerous growth on the american society.

Well, it is unfair for me to continue this rant.  Not many people want to read discouraging news on the 1st day of the year.  I should at least wait to publish this blog tomorrow, once the champagne and the egg nog has digested and we are well on our way to forgetting the resolutions and returning to business as usual.  But, I won’t, because I have absolutely no impulse control and there is the outside chance that this blog-rant will wake up a few people and that we will begin to collect dissatisfaction and begin to store this as a energy propelling us to think and act more liberally and more progressively as we march forward into a new decade.

You see, I do have hope, but my hope comes from collective bargaining.  My hope is based in my fellow Americans who many times in the past saw injustice and rose to the occasion–I do not believe in the power of positive thinking as the sole act of creation that can bring about change.  We humans are constructed with both positive and negative energy charges governing our will.  The fusion of truth to a desire for change is a powerful weapon against the dust and grim and the corrosion that poverty and injustice induce on my mankind.

So as a new blanket of snow falls against and covers for a brief time the earth in” pure as the driven snow” splendor, I want to wish you all a most happy, a most prosperous & and most humble and grateful new year.  And I wish for us all that we do not confuse positive manifestations with empty passive wishes.  For life to be the down stream that we wish it to be, our senses must be awaken to not only positive feelings, but to  a deeply, sacred connection to universal oneness in the form of truth.  God Bless, 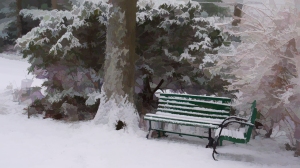 The last decade, the first decade of the 21st century is not off to a very good start.  With enroning, and iraqing, afganistaning, and now providing health care mandates that institutionalize the health of the insurance industry, we are not in very god shape at all.  Earlier in the year when I wrote about the potential revolution that might emerge from looping off 20 % of the middle class and letting them fall into the fault line of the economic earthquake we just went through, I got hate mail back suggesting that I ought to leave the country of I was not satisfied with how things were done here…

I could venture a guess at what party affiliation they might have, I would not want to insult the many friends I have from the other side of the aisle.  I am aware now more than ever that it is no longer a republican thing vs. a democrat thing, it is a have and have-nots thing.  The lobbying industry which represents by an over whelming majority the mega rich and the corporate obtained wealth, are running the show.

The senator from Philip-Morris yields to the senator from Wall Street.  We have a House of Lords and a house of commoners.  I am represented by a house of commoners elected official who never returns phone calls, does not have an assistant return phone calls, but regardless of what i say into the phone or by e mail, I can be certain to receive a stamped form letter thanking me for my interest in government and directing me to all his accomplishments that i can witness on his constituent funded web-page.

I waiver between feeling as if I am cynical and pessimistic and on the other hand thinking that I have a vision of a failing American Empire that might have a sliver of a chance of being saved if enough people get on the same page and recognize that we ought not let the America of our father’s and fore fathers be hijacked by the wealthy aristocrats of greed, and ego induced policy makers.

Don’t you dare–don’t you dare tell me that I ought to leave this country.  Who do you think you are to automatically assume that I do not love America as much as you do–and maybe even more because I understand that not all enemies of our nation are riding on camel backs in the middle east.  We have enemies to our national good right here under our noses.  They are the people who because of their current financial margin of comfort, have no ounce of compassion for the poor, the homeless, the aging sick, the families who have lost all to enron, or lost all to fraudulently administered gate-keepers of the health care system.

Here is one good example.  A decent hard working family man with a high score on his financial reports payed his monthly bill on line.  He paid it after 2:00 p.m. on a Friday.  The bank created a policy that anything posted after two on a friday would not be “technically” posted until 2:00 p.m. the following Monday.  In the mean time, he thought he was safe since his money had been deposited so he proceeded to make several business purchases, as well as several small purchases, like a $2.00 coffee, a few items at a grocery store and, a prescription at a pharmacy.

Because his payment was posted after he made these purchases over the weekend, he was charged a $35.00 fee for each item over his card limit….This created something like three-hundred and fifty dollars worth of over draft charges.  You would think that that would be enough to drive one over the edge, considering that all the purchases amounted to perhaps under $50.00.

Why is congress not angered by this?  Because the banks are too big to fail.  We did not fully understand what that meant when we spend a trillion dollars recently helping these poor bankers out of a jam.  You would think that if anyone had a boot strap to pick themselves up with, it would be the banks….

Too big to fail means simply this–they are bigger that the government, they have no law of the land to answer to.  They are new members of a global aristocracy and America can not stop them.  They are too big to fail.

So corporatist liberalism is that faction of democratic legislators who small minded-ly propose limited, ineffectual laws that are not so much designed to help the american people as they are designed to get them re – elected.

When you get up Christmas morning and see your new health package under the tree remember to thank a congressman with a vote of confidence even if it actually a worst plan that the one we suffer with now…Or as David Brooks wrote in The New York Times earlier this summer,

“[Obama and Clinton] Democrats learned never to go to war against the combined forces of corporate America. Today, whether it is on the stimulus, on health care, or any other issue, the Obama administration and the Congressional leadership go out of their way to court corporate interests, to win corporate support and to at least divide corporate opposition.”

Merry Christmas, and Oh yes—–ooh, ooh ooh all the way to the corporate banks…