Life has a way of presenting itself in such a manner that we believe that the act that just happened in front of me is the cause for my emotion. That simply is not the case. All kind of terrible events happen to us or in front of our eyes. But our reaction to these random events do not cause us to have an emotion. Our emotion colors how we see the act or how we perceive the person in front of us.

The more powerful our reaction is to an event gives that event its significance its meaning and it value in our lives.

I have experienced several se-changes in my life. I want to say a few words about the most recent which is still resonating with me today.

When Francis was elected to the thrown in Rome, I had a violent, somewhat vicious and totally uninformed reaction to him. One more pompous man dressed in a white dress, covered in gold lame, accessorized in crimson red and wearing Prada shoes…parading around dispensing judgements that were in fact condemnations to hell.

I have to apologize to Francis. My partner was very stern when he told me I was spouting out language that had no bearing on the man himself. I was prepared to condemn him as I has felt condemned by the church.

I was wrong, or at least I now have hope that perhaps I was wrong. His tone and his peace manner imparted in me a serenity and formed a cavern in my heart that left room for reconciliation, forgiveness. I watched with tears as this humble man moved a high liturgy from inside the basilica, adorned in ancient marble and gold and paintings by Michelangelo, to a juvenile detention center in Rome where he proceeded to wash the feet of 12 inmates instead of washing the feet of twelve old Cardinals.

I listened in disbelief when he made poverty into a global issue that we in all nations needed to come to a better understanding of. I read his encyclicals where he instructed his bishops and priests to support civil unions for Gay couples, advocating that we be afforded all the rights and legalities that belong to marriage. He asked that we might keep the sacrament of marriage as unique to the partnership between man and woman, because it was a venerable tradition.

My decades of resentment toward the Catholic church has created a cold spot in my heart, one that I was no longer aware of. But when Francis with his insistence on peace and poverty and humility entered into my consciousness, I had an immediate desire to emulate that humble nature that smiled out of what looked like a man very much at peace with himself….

Who knows, he might be exactly what the world needs at this point in time….I have no need to forgive the church for the insanities of the Spanish inquisition, nor can I forgive yet the insane position that condoms would increase the spread of AIDS.

But if I let myself be willing to hear what he says without first judging him, I think I will have done myself a great favor….. 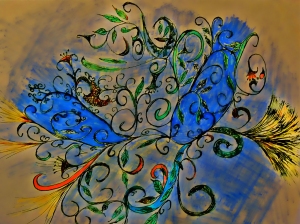 i found myself explaining it to a patient recently in this way:  picture your self at the back door of your home.  the door is open and you are standing in your kitchen.  there is a threshold  which is about six inches in width.  as you step outside and cross over the threshold you have traveled the distance of less than one step; yet, the experience of being outside is extraordinarily different from where you were a moment ago standing in your kitchen.  the distance in space and time is infinitely vast and microcosmically small all at the same moment.

the experience of feeling connected to the the moment as opposed to being in the moment without feeling connected to it has that same paradox that surrounds it.  i am in side my house in my kitchen and only six inches away from being outside in the vastness of the cosmos without having the shell of the house around me.  not having the shell of the house around you give you a vastly different experience of the cosmos.  there is a parallel here to the mind field in which the ego is born.  the egoic house sits in a vast mental field much larger that the ego itself.  for sake of differentiating the two I use the term “ego” for one and the term “self” for the wider mental field of consciousness.

the alphabet poses a similar question.  when we write the word in the majuscule “BE HERE NOW” it is both the same and different at the same time as “be here now.”  so, the concept that i am addressing is a simple one, and a difficult one at the same time.  we can not help but pass through the moment, but unless we train our mind to recognize the moment as the “now,” there is a pretty good chance that we will miss the experience of the now.  the value of experiencing the moment  lies in the notion that by experiencing the now we are able to access a stillness, a lack of urgency to life; and if we are able to get that concept we are able to make decisions about our wants and needs based on knowing the experience of well-being. instead of aiming for well-being and while  experiencing the feeling of lack.

the feeling of lack is not present in the experience of the current moment and because of that fact we are able to base our values and conditions on a known/experienced feeling of well-being.  this is the essential element of any law of attraction.

by giving-in, subjecting ourselves, freeing ourselves or surrendering  to “is-ness” we feel the fullness of our vitality & we are able to feel an unbiased sense of aliveness and oneness with the universe.  concepts of judgement, and concepts of self criticism seem to disappear from our consciousness.

one last point about the experiencing of the moment:  there seems to exist the possibility that for some people the defenses of the ego are such that experiencing the moment becomes impossible.  the on-going “background thinking-voice” that we hear a moment before we sleep may in some people be so “loud” that it prohibits the attention being drawn to the moment. for some people it might take an external attention to distract the mind from paying on-going attention to the on-going voice.  an example that I can draw from my experience is the sound of cello especially being played in low registers.  the sound is so soothing for me that i feel compelled and drawn to the sound and while there listening, i find that I have had not consciousness of the background voice…i mention this because in order to fully enjoy the experience of entering the moment we have to find a way to distract ourselves from the egoic voice or else the voice will surely keep its grip on the mind and we will not get to the stillness and the calm that provides us with the exit sign from the ego……